The video above is a PowToon I made on the PowToon website. This gives out information about Lady Murasaki Shikibu, the world’s first author. She wrote The Tale of Genji. This book has fifty four chapters, maybe even more. This is basically a video version of a powerpoint. It has a slide which is however seconds long, in my case ten, and it’s a fun way to use visuals to get an idea across.

I learned more about videos in this project, believe it or not. It showed me a simple version of video editing that I’ll be glad to try out. This also gave a new way of a presentation I could use in the future. Many people don’t expect a student to have a video for class, which will be a nice way to possibly earn extra points.

This project was similar to powerpoint, but in video form. It helped me a little to think of everything as slides and clip art. I enjoyed using animated things, but I decided to take them out to make it more professional.

The tool I used to make this was PowToon. It was tricky at first to figure out how to use the website, but after a day, I had it down. It was really fun trying different things out to see how it’d look.
The project above is a quiz I made based on my Glog and Samurai presentation. This is a short quiz to test what you know about samurai. It was specifically made for students in my Computers class at school, which explains the first three questions. I made this quiz in Google Forms, a part of the Google Drive.

This project’s goals are similar to a website I use once in a while to just see different things. It’s called Quizzilla and is with Nickelodeon. Many people create quizzes for people to take on this site that have different purposes. Some are for fun, other’s for learning. It’s a nice to site to visit every now and then.

The tool I used was stated before, Google Forms. This is a simple program to use, also. You have a question, and you can add more. There are also different types of questions such as Paragraph Text, Multiple Choice, Graphs, Checkboxes, and more. It’s fairly simple to use after a bit of experimentation with the program.
The project above is a Glog that I had made on edu.glogster.com. It’s very similar to being a digital, interactive version of a poster. You can have video, audio, and data on one of these. You can also have moving graphics to add to your Glog. For my class, I had to take a previous presentation I've done and reteach the lesson using a different media type. I chose to use my Samurai presentation since it was what I knew best.

During this project, I learned a lot about different media types and how they are used. I also learned more about edu.glogster.com by using it to make my project. I learned how to edit and make a glog, upload the images I wanted, and refreshed my memory on how to embed something into a website.


This project is similar to an abstract painting I had to make in Art class. I had to make something, take a small part of it, and create something new with it. It was hard to think of something to do with it, but I did manage to create it.


The tool I used to make this project was Glogster.com. It was really hard to use at first, but I eventually learned how to use it. It can be frustrating, though, when it does something that you don’t want it to do. If you want a custom picture or a picture you have on your hard drive, you have to upload it to the site first. At first, I didn’t understand this. After a few minutes, though, I realized that it just took a moment to upload and show on the screen. Another thing that I had to teach myself about this was the graphics. I was impatient a lot during this and wouldn’t just wait. I ended up with many of the same graphic on the poster at once. Despite the hard time, however, I think that the Glog turned out to be a good lesson.
The slide show above was a way to see how well our public speaking was. It was hard for me because I'm not the type of person to speak in front of a lot of people. In class, we had to make a presentation that we knew a lot about. I chose to do samurai, because I'm familiar with the fighting style and weapons. In this project, I learned different things about picture manipulation in PowerPoint and how to embed an HTML into a website. I also learned the proper way to speak in front of a crowd. It was very frightening when I had to present, but I survived. The program I used to make this presentation was PowerPoint, but I downloaded it to Google Docs so I could put it on this website. 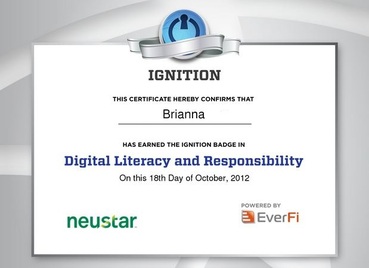 Click on image to enlarge.
This was an assignment called Ignition Digital Life. We had to finish, do, and pass seven different role-play-like modules. It was fun to do and was an interesting way to learn. I was able to learn many different things about the internet and digital safety.

This project was supposed to teach us digital saftey and internet safety. Such as which websites are credible, or how much personal information to give out. It was very effective and I'm now even more aware of what I do on the internet than I was before.

This program reminds me of the baby computer games I used to play when I was smaller. It's very much like them as I'd play different Disney games; the Disney Princesses and Micky Mouse and Minnie Mouse being my favorites.

The program we used was Ignition Digital Life powered by EverFi Education. It's a great way to learn more about the internet and digital safety. It taught me a lot from some videos, games, and polls. 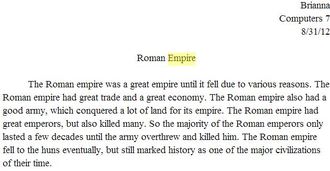 Click on image to enlarge.
This was my first Google Docs document. We were supposed to write everything we knew about the Roman empire in this one paragraph. It was a little challenging, due to the fact that I prefer to use Microsoft Word, but was educational, nonetheless.

I learned more about Google Docs and to not just stick with the traditional way of doing things. I also learned that there's supposed to be a space between the title and the heading, and the heading and the text.

This is just a furtherment of my word document skills and a helper to my future. If anything, it'll be of great assitance in the near future.

The only tool we used really was Google and Google Docs. I did learn more about both, but didn't exactly learn a new tool. I must admit though, that several things were rather interesting in this assignment.
Computers Teacher
Powered by

Create your own unique website with customizable templates.
Photo used under Creative Commons from Ernst Vikne