In Science, we're learning about cells, and even more specific, the organelles. It's a little boring, but at the same time fun. In the Nucleus, there's DNA that controls your genetics, which what we've been focusing on lately. Then there's RNA that helps DNA get messages around the cell. RNA also helps create amino acids for the cell. 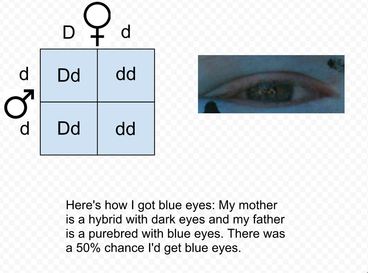 Click to enlarge image.
This was a project I had to do for Science on Google Docs-Drawing. This was a Punnet Square I had to make that showed how I obtained my eye color, blue eyes. As the picture states, I had a fifty percent chance to get blue eyes from my father. It helped me learn a little bit more about Genetics.


The website I used was Google Docs-Drawing. It was new to me, but fun all the same. It was interesting and fun to. I had to wing it to get it done in time, but in the end, I think I did a good job. I can't really relate this to anything, though.
Powered by